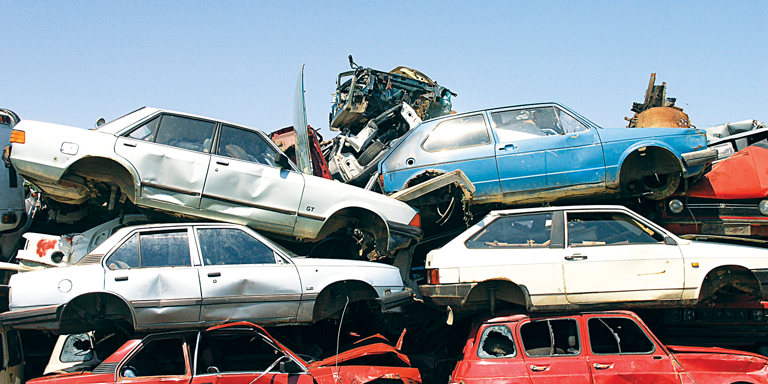 Situation
After years of crushing cars, gas and other substances leaked into the soil and water table. The leakage severely contaminated the water wells, some of which were drinking wells servicing over a dozen homes on the perimeter of the contaminated property. Approximately 10-15 homes were affected, including the home of the salvage yard owners who lived on-site.

Goals
There were two primary clean-up goals for this site. Goal #1 was to fix two drinking water wells that serviced six homes. Goal #2 was to clean up the ground water throughout the property and bring the MTBE level below 13 parts per billion (ppb), which is the state maximum contaminant level. Tangentially, Secondwind needed to find a way to clean up the site without impending ongoing salvage yard operations.

Challenges
The two wells requiring clean up were not connected. There was also a lack of space on-site to set-up the necessary equipment for ample treatment. Additionally, the presence of the pond meant extra caution needed to be taken with respect to backwash water discharge.

Solution
Historically, accomplishing the two separate goals would require two systems; but, given that the clean-up of the property would be funded by the state, there were additional fiscal concerns. Therefore, Secondwind proposed to the State one creative system to help reduce the cost by an estimated 50%.

Secondwind worked with multiple sub-contractors including a well company, and excavation and building crews to do two things: make room for the proposed system in a portion of an existing building on-site and create two new dry wells to avoid affecting the pond with discharge run-off. Excavation also laid the groundwork for new piping into the surrounding homes to deliver clean water.

All of this needed to be planned carefully and efficiently with the salvage yard owners since the treatment system would require 250 square feet of their existing business space.

The most highly contaminated well had an MTBE level of 16,000 ppb. Because of the extremely high contamination level, the system installed by Secondwind had to operate 24 hours a day and pump 7,000 gallons of usable water daily (1,500 for domestic use). Secondwind proposed a 1,000 gallon holding tank for the potable drinking water and what wasn’t used by the homes was directed to overflow into the ground to clean up the existing ground water.

Results
To use only one of the contaminated wells as an example, a 10,000 ppb MTBE level now reads at under 100; a significant decrease given the complexity and severity of this particular case.

By reducing costs by approximately 50%, Secondwind was able to save New Hampshire taxpayers much needed gasoline tax funds which can now be allocated to other projects. By using one system instead of two, noise and space use were minimized.

Given the severity of contamination, the length of time the system will be needed on site has yet to be determined. Continued observation and regular assessments will be required.