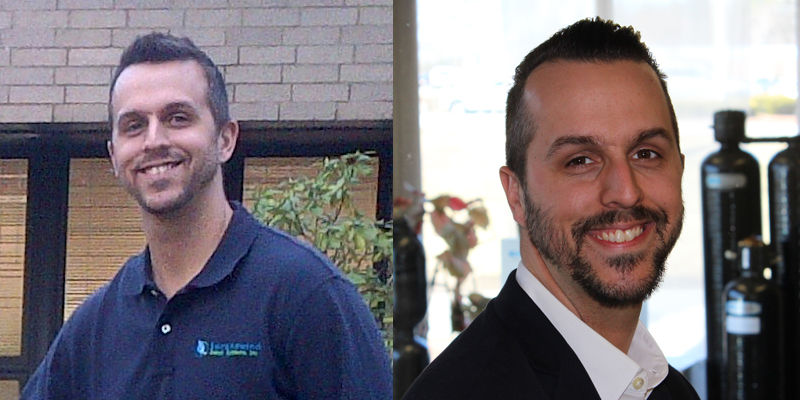 Core Values of an organization are only brought to life through the orientation and actions of its employees and staff.  In 2020 we plan to highlight a number of our employees and the ways in which they express and articulate our Core Values in thought, word, and action.

In January we explore two of our core values: Driven to Excellence and Respect for Customers and Employees through the hard work, consistency, courtesy and sincerity of Certified Water Specialist Jesse Gagnon.

When people speak about Jesse, the phrase ‘family man’ inevitably comes up. His commitment to his family provides the ground from which Jesse’s drive to excellence and respect for all arise.  “Sometimes we can forget about what’s important when we get caught up in the day to day,” comments Ernie Gauvin, Operations Manager. “Jesse, while always striving to do the best for the company, definitely has his priorities straight.”  He is often described as compassionate and sincere. This orientation in the world provides the inspiration and fuel for Jesse’s focus, courtesy and consistency in all he does.

Jesse embodies the Secondwind value of Driven to Excellence. Vicki Coltey, Part-Owner and Quality Assurance Manager for Secondwind notes that Jesse is someone who you can count on, if he needs help or doesn’t have an answer for something, to ask for both. “You don’t see that in many people,” she notes “and it’s a sign of both confidence and leadership.”

Perhaps one of the most important qualities that points toward Jesse’s determination to excel are his patience, clarity and follow through. Water chemistry and treatment can be both confusing and overwhelming.  One new customer recently commented, “I liked Jesse’s ability to communicate effectively to different knowledge levels.”

Respect for the Customer

As a WQA Certified Water Specialist Level III, Jesse is extremely knowledgeable within the field of water treatment and provides our customers with carefully customized water treatment configurations. “Jesse knows how to listen and really understand the cares and concerns of a potential customer. More importantly he genuinely cares about them as people and meeting their needs,” says Founder and President Christine Fletcher. “He works with people as if they were his own friends and family.” Words customers use to describe him are ‘respectful’ and ‘caring.’

Jesse works hard in his day-to-day role. He is also concerned about Secondwind as a whole, and lends his thoughts and perspectives to improving things for customers, employees and business alike.  “As the President I appreciate Jesse’s business sense,” says Fletcher. “In his job he is measured on his personal accomplishments yet he also expresses interest in how the company as a whole is doing. He is willing to put personal energy into figuring out how to solve problems along the way.”

“Jesse sets the bar high,” says Kristi Jackson, Secondwind’s Finance and Administration Manager. “Accountability is something he believes in. He always does what he says he is going to do for our customers and for our organization. He believes in Secondwind’s Vision, Mission and Values.”

Thoughtful, compassionate, and committed, Jesse Gagnon has been a valued member of the Secondwind team for a decade. The company and our customers are better for it.