Radon is a colorless, odorless gas that exists due to the radioactive decay of uranium, a common element in our bedrock.  Radon gas dissolves into groundwater and then is released into the air when the water is used within a home or building.

Radon has no indicator to announce its presence, but the potential threat to your family is very real. It gives off harmful radiation, which is attributed to an increased risk of certain cancers. Inhaled radon is known to be the second leading cause of lung cancer in many countries, second only to cigarette smoking. It accounts for an estimated 20,000 lung cancer deaths in the US annually, and 15% of all cases worldwide. Smokers are at particularly high risk if exposed to radon concentrations.

Its presence can only be determined by testing. Because every home is different, in order to recommend a system for your radon problem, we offer a free site evaluation, do some testing, learn about your water use patterns and your preferences.

Remove 99% of your incoming radon quietly and reliably with the Bubble-Up air stripping system.  Smaller than a washing machine, the unit uses a quiet blower to remove radon from the water and vents the radon gas safely outside. The system provides your home with plenty of radon free water delivered to your faucets with great pressure.

Radon, MtBE and Chlorine can be removed using high quality granular activated carbon configured in a filter sized specifically for your water and your home.  The Secondwind adsorber comes with a pre-filter and post test to verify proper performance.  Available in many sizes, we will be sure to configure the size that is correct for your home.

This Multi-stage diffused bubble aeration system will remove 99% of your incoming radon with a quiet submersible pump, a fully accessible aeration chamber for easy cleaning, an adjustable aeration timer, and a double wall foam insulated tank that will not sweat. 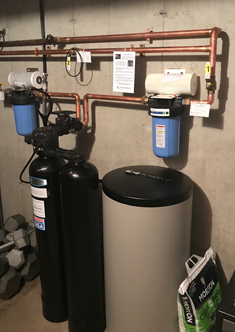