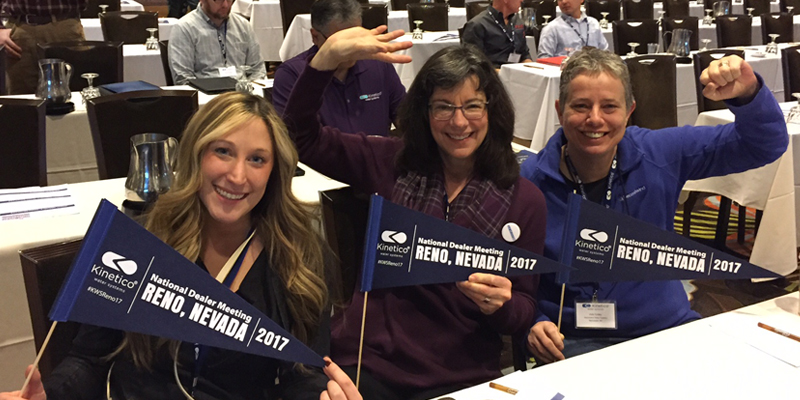 Why It Matters That Secondwind Is Woman Owned and Women Led

Secondwind Water Systems once again advanced in this year’s Business NH Magazine’s annual NH’s Top Women-Led Businesses issue. Led by Founder and President Christine Fletcher, Secondwind ranked #37 out of 90 businesses run by women in the Granite State. We’re pleased to say that we jumped from #43 last year, 6 points! We’re also proud that we represent a company led by women in the trades.

“I didn’t start Secondwind so it could be a woman owned business. I just love business.  Given that there are hurdles in the business world that can make success for women elusive, we’re happy to have this recognition,” comments Fletcher.

Many know that men dominate the water treatment industry. This reflects nationwide statistics which show that 1 in 20 women wind up in the trades. “When I go to a national Kinetico dealer meeting it is rare that a woman is the President or CEO.  For decades I was the only woman in that role. It was even less often that you’d hear of a woman in the role of installing or servicing the water treatment equipment,” reflects Fletcher.

Secondwind has had two female technicians/installers through the years.  We currently have one female Water Specialist. We have had four throughout our history. In addition to Fletcher, many women fill management and leadership roles.  Secondwind’s Leadership Team consists of  women in the roles of Quality Assurance Manager, Marketing Manager, and Finance and Administration Manager.  That’s 50%!

Some may wonder why we here at Secondwind think this is so important. According to the introduction to this issue in Business NH Magazine, the number of women-led companies nationwide has grown substantially over the last 45 years. This is an increase from 4% to 40% of all firms. Employment of women in that time grew from 230,000 to 9.2 million. However, this growth is not reflected in the trades. In fact, Secondwind is an anomaly, and this is something we’re quite proud of.

Despite Progress, Not Enough Women In The Trades 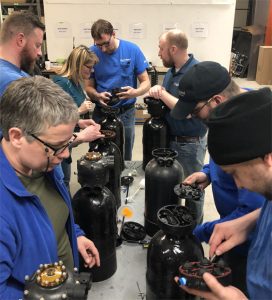 Vicki and Laura working with the team, training on our valve heads.

The National Association of Women in Construction has participation of women in the trades at about 9%, and the last 25 years or so of Bureau of Labor Statistics Current Population Surveys bears that out. Sadly, the percentage of women in construction and the trades overall has hovered somewhere between 9% and 10% since 1996 and is currently at 9.9%. But of the 8.3 million that were employed in field production of the construction and extraction industries in 2018, only 3.4% were women.

Building inspectors (14%), painters (7.2%) and helpers (5.6%) saw the highest participation by women last year, with their percentages in trades like carpet installation, carpenters, drywall hangers and electricians landing somewhere between 1.9% and 3.7%.

Of the 40 trades listed under the construction and mining category, more than half didn’t include enough women to muster up a statistically significant percentage at all. These included such in-demand trades as plasterers and stucco masons, iron and rebar workers and solar panel installers.

Construction and trade industries provide well-paying jobs that don’t require a college degree. In 2018, women working full time in construction and extraction occupations made $785 per week at the median, compared with $834 for men.

This gender wage gap is narrower than for women overall:

while women overall earn 81 cents for every dollar earned by a man,

women in construction make 94 cents for every dollar earned by a man in the field.

“The need in these industries for skilled workers keeps expanding. Well-paying jobs that could be filled with women,” Fletcher comments.  “We like to think that we can be an example of what a woman led company in the trades looks like.  Welcoming more women into all roles within our company, including service and tech is something we strive toward. We want to see more women in NH have access to these opportunities.”

Encouraging Women Into Construction And The Trades

So what is it that is keeping women away from the trades? For one, as has been the case in the water treatment industry, roles have traditionally been filled by men. Some women might find the work environment intimidating, especially given accounts of occasional harassment and inequity. There is also a certain amount of implicit bias that comes with a woman showing up to do a job traditionally done by a man. “There are days when our Quality Assurance Manager, Vicki, shows up to troubleshoot and fix someone’s equipment and they are looking over her shoulder for the guy,” says Fletcher. “Some have even said things like ‘I wasn’t expecting a lady!”

“Proving to women that they belong in the trades and that they’ll be treated well requires a shift in mindset that won’t happen quickly,” comments Fletcher. “That’s where we, and other companies like us come in. We want to leverage our position to influence, educate and provide opportunities for women in NH to access these jobs. It’s why articles like this in Business NH Magazine are so important. It shows that this is a viable career path for women.”