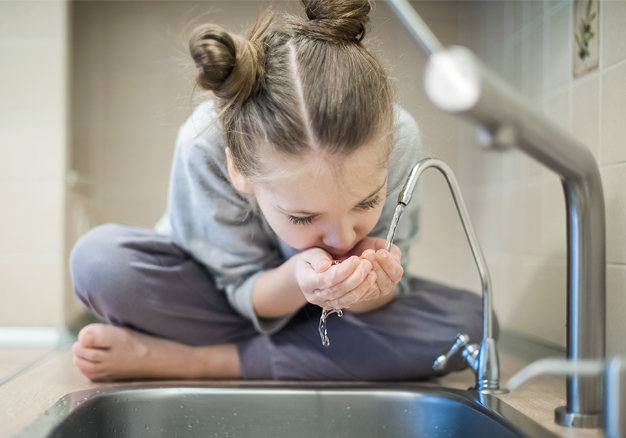 We can no longer take the safety of our water for granted. Much of New Hampshire water contains arsenic, uranium, radon and bacteria. When you turn on your faucet, bathe your child, water your lawn, or flush your toilet, you want to know that your water is safe and clean. We will test and explain your water chemistry in a way that is easy to understand and then recommend the most efficient, effective and economical water treatment solution, custom fit to your needs.
Free water analysis

What's in your well water?

The NH Department of Environmental Services estimates 46% of residents use private wells as the primary source of water for their homes, and less than 50% of private well owners regularly test their well water system. We’re regularly asked how often should well water be tested. Secondwind recommends well water testing once per year to determine contaminants that may cause health concerns and to maintain proper pH levels.

A number of health issues result from long-term exposure to arsenic in your home’s water. NH has a relatively high incidence of arsenic and it is something that we treat for often. Arsenic is one of the most common elements of the earth’s crust. It is present in our bedrock and small amounts dissolve into the water that travels through the rock. It ends up in the water we pull from our wells and offers no taste, odor or color to warn us of its presence.

More than 75% of the wells in New Hampshire are bedrock wells, and 20 to 30% of all private bedrock wells measure above the EPA arsenic limit of 10 parts per billion (ppb). Ten ppb is roughly equivalent to a few drops of ink in an Olympic-sized swimming pool. New Hampshire lowered the Maximum Contaminant Level for arsenic in public drinking water in July 2021 from 10 ppb to 5 ppb.

People who drink water containing arsenic in excess of EPA’s standard over many years have experienced circulatory system problems, neurological issues and skin damage. Those who are exposed at higher levels have increased risk of several types of cancer. Research from Dartmouth College suggests this is one reason the state has some of the nation’s highest rates of certain cancers, such as bladder cancer.

Radon gives off harmful radiation, which is attributed to an increased risk of certain cancers. The radon in a water supply poses both an inhalation risk and an ingestion risk. Inhaled radon is known to be the second leading cause of lung cancer in many countries, second only to cigarette smoking. Radon from granite dissolves into well water and goes directly into NH homes’ drinking and cleaning water. Radon also seeps into homes through cracks and seams in foundation floors and walls.

Radon is a colorless, odorless gas that exists due to the radioactive decay of uranium, a common element in our bedrock. Radon in well water occurs when the gas dissolves into groundwater. Radon is released into the air when water is used in a home or building.

Radon accounts for an estimated 20,000 lung cancer deaths in the U.S. annually, and 15% of all cases worldwide. It is estimated that 100 lung cancer deaths per year in New Hampshire are due to radon exposure. Smokers are at particularly high risk if exposed to radon concentrations. Because of NH’s prevalence of bedrock, the state has a relatively high occurrence of radon in well water. Radon gas is found in all types of wells, but particularly in bedrock (aka drilled wells).

The main concern of uranium in water is consuming it. That’s how uranium accumulates in your bloodstream over time. Consumed uranium travels through our cells, destabilizes nearby atoms and damages chromosomes. This exposure can lead to cancer. Uranium is a naturally occurring metal found mainly in New Hampshire granite – which means, here in the “Granite State,” there’s potentially a lot of uranium out there.

Uranium naturally occurs in other bedrock, too. Wells that are drilled into bedrock aquifers may produce water containing uranium. Secondwind Water used to find uranium only in a specific part of New Hampshire, off of Interstate 89. Recently, our team has found it in many other areas of the state and even on the border of Maine.

As a heavy metal, uranium typically accumulates in the kidneys. This can lead to cancer in the kidneys along with the liver and bones. Uranium exposure can also lead to reproductive issues.

Reasons for a well water test

Options for treating your home's water

Certified to remove more contaminants with better pressure and volume than any other residential RO system in the industry.

Is your water safe?

Our region contends with many water quality problems that can enter into our water and jeopardize the health of your family.

Is your water clean and great-tasting?

Staining is not fun, water will dissolve anything it comes in contact with. Your water should be colorless, tastelesss and odorless.

Is your water costing you money?

EXCELLENT Based on 167 reviews.

Donna Buxton
Secondwind water has streamlined our water plant to run at the best efficiency ever. Thank you for all your guidance.

Jackie Bennett
I am thoroughly impressed by this company. We had sediment in our well water, and now we have an affordable and efficient filter in place within a week's time. Both the sales rep and the technician were excellent. They did not try and sell me anything that I did not need, the communication was perfect, and the price was exactly as indicated in the end. Would highly recommend!

Lisa Potter
From the email reminder to the email receipt when finished, all aspects of staff and service were great. Professional, timely, informative and efficient

Sheila Pitts
Very knowledgable, sharing an abundance of information to maintain our system that we hadn't been told before. Polite and respectful employees that made us feel comfortable. Would like to have one individual assigned to be familiar with our system and needs, though. We're being given different information each time we have maintenance performed but these last two men actually took time to "show and tell" what we need to do. Thanks, guys!

Nathalie Gilli
Great company and great people. Sales and install team was absolutely wonderful and very knowledgeable. Highly recommend if you have any water quality concerns.

Timothy Stickney
Such a courteous service on my system today. Secondwind makes the process of owning and maintaining my system so easy!

Mobyblz Patsjam99
Ray was great! Secondwind installed a water softner a couple years ago. Not only are their products great, their techs are great as well! I highly recommend them.

Ray LaBranche
Been a second wind customer for 30 years we have a Kinetico system in Nov 2021 we started having bad water issues ( mainly high iron content ). They came over the house twice to fix the issue without any success, one of their trouble shooters came to the house and made some recommendations for updating my equipment. New equipment was installed in March 2022 the installers were very professional and knowledgeable once done with the install they explained the mechanics to us and did a follow up a few weeks later. Problem resolved nice clear clean water through out the house. I definitely would recommend them
0
HAPPY CUSTOMERS
0
%
SATISFACTION GUARANTEED
0
CERTIFIED PROFESSIONALS
Go to Top